If opera is all about telling a story with music, then opera is universal to every culture on Earth and is probably 50,000 years old - as old as humanity itself. This worldwide tradition of music is almost proof that we all descend from a common root somewhere in Africa and that our ancestral migrating tribes took their music to the furthest extremes of the Earth.

They say that the first music started with the human voice imitating nature sounds. Listen to this fine recording of sounds from an African forest. This is maybe what our ancestors were hearing and imitating:

Our earliest ancestors were all hunters and gatherers. They had very little time to sit down and write a song. Civilization and formal music came later, with agriculture. In the prehistoric forests, food was scarce, and every effort was put into finding the next meal. In the thick of the forest it was very hard to see. We probably learned how to communicate from the birds, and probably camouflaged our messages by imitating bird sounds, so that the deer or bear we were hunting would not know we were there! We also learned how to produce sounds by banging on a hollow trunk or blowing a conch shell as they still do at a Hawaiian luau.


In isolated areas of our world, there are still hunter-gatherer tribes whose lifestyles have remained pretty more or less the same for thousands of years. If we listen to the traditional folk music of the Aboriginal Australians or the Inuit hunters of the north or an American Indian pow-wow, we just may be able to imagine what music must have sounded like thousands of years ago.  Here is some Aboriginal music, it's an instrument called a didgeridoo. Listen to the hypnotic rhythm of nature and the sounds that almost mimic the animal noises we were hearing in the wild.

The first musical instrument was probably the human voice, which can produce a lot of sounds, from singing, humming, whistling through to clicking, coughing, yawning and acrobatics with the throat. Here is some fabulous throat singing from an Inuit tribe living in the far north between Siberia and Alaska. I can just close my eyes and imagine myself with my ancestors in the Ice Age, long long time ago, wrapped in furs, huddled with my friends and listening to this hypnotic singing, having gorged on mammoth meat from today's kill:


These are examples of what I define as "primal" music. I use the word "primal" because "primitive" has negative and denigrating connotations. Primal music is the music that comes naturally to us, by the use of our voice, or by an instrument we make from our immediate environment. It is the earliest form of music. It is the thump of our great grandmother drum beating like the very heart of humanity or the polyphony of the many sounds of the forest. Here is a Northwest Native American pow-wow. What do you see in this picture? What sense of community do you think the participants feel while they are making music?

Let us be truthful. Pygmy, Australian Aboriginal, and Native American music is far from being Mozart, Beethoven, or Mahler. I can harp on about the complicated rhythms, subtle half-tones and intricate melodic scales of non-European folk music and will only end up sounding pedantic, pretentious, or even worse, condescending! Whom do you think I am trying to fool? Western classical music is unquestionably the most complex and developed type of music in the world. It is the product of a civilization which had the luck of the draw to have access to nutritious food, a variety of domestic animals, free trade, and strong weapons. Jared Diamond would agree. These are the very same reasons he came up with when he attempted to answer the question why European civilization dominates our present world in his book Guns, Germs and Steel, the Fates of Human Society (1997). For a tribe living in the heart of Papua New Guinea, a Stradivarius violin would just be another piece of European "cargo".

In the next series of blogs, I shall be exploring the Western musical tradition with a lot of Jared Diamond's ideas in mind. We can almost link the development of music to the development of technology of a civilization that started in Mesopotamia and moved westwards towards Europe. Where agricultural societies flourished, music naturally developed with mathematics, art, and astronomy.

BIBLICAL MUSIC AND THE FERTILE CRESCENT

Eventually some of these hunter-gatherers discovered agriculture and the ability to grow and store food. They became farmers and usually settled near a source of water. Once a group of these farmers planted their crops, and irrigated their fields, they had plenty of time to create babies, think, invent, and develop better tools, including better musical instruments. They also had more time to develop their weapons and their fighting skills. These farming communities eventually became villages and city states; their shamans and leaders became priests, kings, and even living gods. These city states eventually became the great civilizations of Egypt and Babylon. 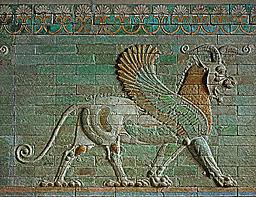 From the battlefield to the King's nuptial chamber, music was always present. How this music sounded like may be anybody's guess, but there has recently been some erudite research that has tried intelligently to re-create the musical instruments and actual melodies based on real pieces of evidence.

Here is a piece of Babylonian music based on such research and played on a replica of a 3000 year-old instrument - the lyre or hand held harp. I get chills to think I am hearing something so old:


Now for something really exciting! This is Hurrian hymn No. 6 played on a replica of an ancient instrument. This has recently been claimed that this is the world's oldest known written song.
Here is a reconstruction of ancient Egyptian music.


Although the composer Michael Atherton has taken liberties, this is a faithful reconstruction of ancient Egyptian music. Authentic? No, but definitely what you would call an educated guess in every sense of the word!


The YouTube comments, "By studying literary and visual records as well as surviving artifacts, he (Michael Atherton) began to get an idea of which instruments had been used in ancient Egypt, then approached the compositions by drawing on his experience with medieval monophony, Eastern European and Turkish folk music, and a variety of intercultural projects."

Until the invention of the phonograph at the turn of the 20th century, the interpretation of music has been based on educated guesses. How do we really know how the symphonies and sonatas of Beethoven and Mozart actually sounded like? We can only interpret the notes that are written, or from clues mentioned elsewhere. Our contemporary interest in producing "authenticity" in classical music has led musicians to re-invent the music of Bach or Handel by playing it on period instruments. So let's continue our journey and enjoy these "educated guesses" on the way. THE GREEK THEATER AS THE CRADLE OF  OPERA

The theater of Ancient Greece, or ancient Greek drama, is a theatrical culture that flourished in ancient Greece between c. 550 and c. 220 BC. The city-state of Athens, which became a significant cultural, political and military power during this period, was its centre, where it was institutionalized as part of a festival called the Dionysia, which honored the god Dionysus. Tragedy (late 6th century BC), comedy (486 BC), and the satyr play were the three dramatic genres to emerge there. Athens exported the festival to its numerous colonies and allies in order to promote a common cultural identity. Western theater and opera originated in Athens and its drama has had a significant and sustained impact on Western culture as a whole. Most of the vocabulary in English associated with theater is Greek in origin, from actor to stage to theater to drama, to hero, etc.